skip to main | skip to sidebar

Yeah, it's been a very long time since I posted here. I actually forgot I had this little blog. Never the less, here I am.

I need some place to vent, and this blog is pretty disconnected from my online presence. So it's safe to talk about some things that I can't on Facebook. Now that I'm here, I'm not sure what to say.

I have known MM for 8 years. He was 15 and a brand new Senior Patrol Leader when I met him. I was a new Scoutmaster, and we began the leadership roles that would define us together.

Somewhere in there we became friends. MM aged out, and remained with the troop as adult leader. I mentored him, he helped me. Became my right hand. Became my kid brother.

We endured an episode of youth on youth sexual abuse in our troop. We spent hours and hours talking, discussing, supporting one another. He was the first person I texted when I had my heart attack, and he was the first non-family person I saw when I came out of surgery. Any time I needed help, he was there. He kept me on track and saw to the many things I tended to forget.

I trusted my son's life with him. I loved him. And I still do. That's the problem.

It turns out the young man I thought I knew had a dark side. For at least the past year, and probably longer, he has been sexually exploiting children. Using a fake Snap Chat profile to extort young boys into sending nude and sexually explicit pictures. Hundreds of them.

What the fuck, man. What the actual fuck.

I am beyond devastated. Broken. Rudderless.

I've been crying on and off for two weeks. Feeling angry, betrayed, heart broken, confused. Mourning the loss of a person I thought I knew. Someone I took pride in being partly responsible for. That's one of the great things about being a Scoutmaster. You get to take pride in the fine, upstanding young men you have a hand in molding. And then this happens.

I am friends with his father, and have been talking to him a lot. Trying to make sure he is OK. He is not.

Yesterday I talked to MM on the phone. He's in federal prison. I couldn't ask him any of the questions I have. I couldn't scream at him. All I could do was make small talk and ask him about his day. Surreal.

The hardest part of this is I still care about him. I worry for him. All while I am still horrified by him. And waiting for more information to come to light.

I read the complaint today, which is what prompted me to turn here. Absolutely revolting to read the details of the two charges against him, and the terrible knowledge that this is just the beginning.

I don't know where to go from here. How to feel or process. It's a nightmare from which there is no waking.
Posted by TK8103 at 7:30 PM No comments:

Email ThisBlogThis!Share to TwitterShare to FacebookShare to Pinterest
Labels: Asshole of the Moment, Emoting, Fubar

So, my dear sweet 7 year old daughter left me an OREO in a plastic lunch bag with the following note:

"Here is a snack for work. Happy April fools day"

She replaced the filling with toothpaste.

Email ThisBlogThis!Share to TwitterShare to FacebookShare to Pinterest
Labels: Rugrats 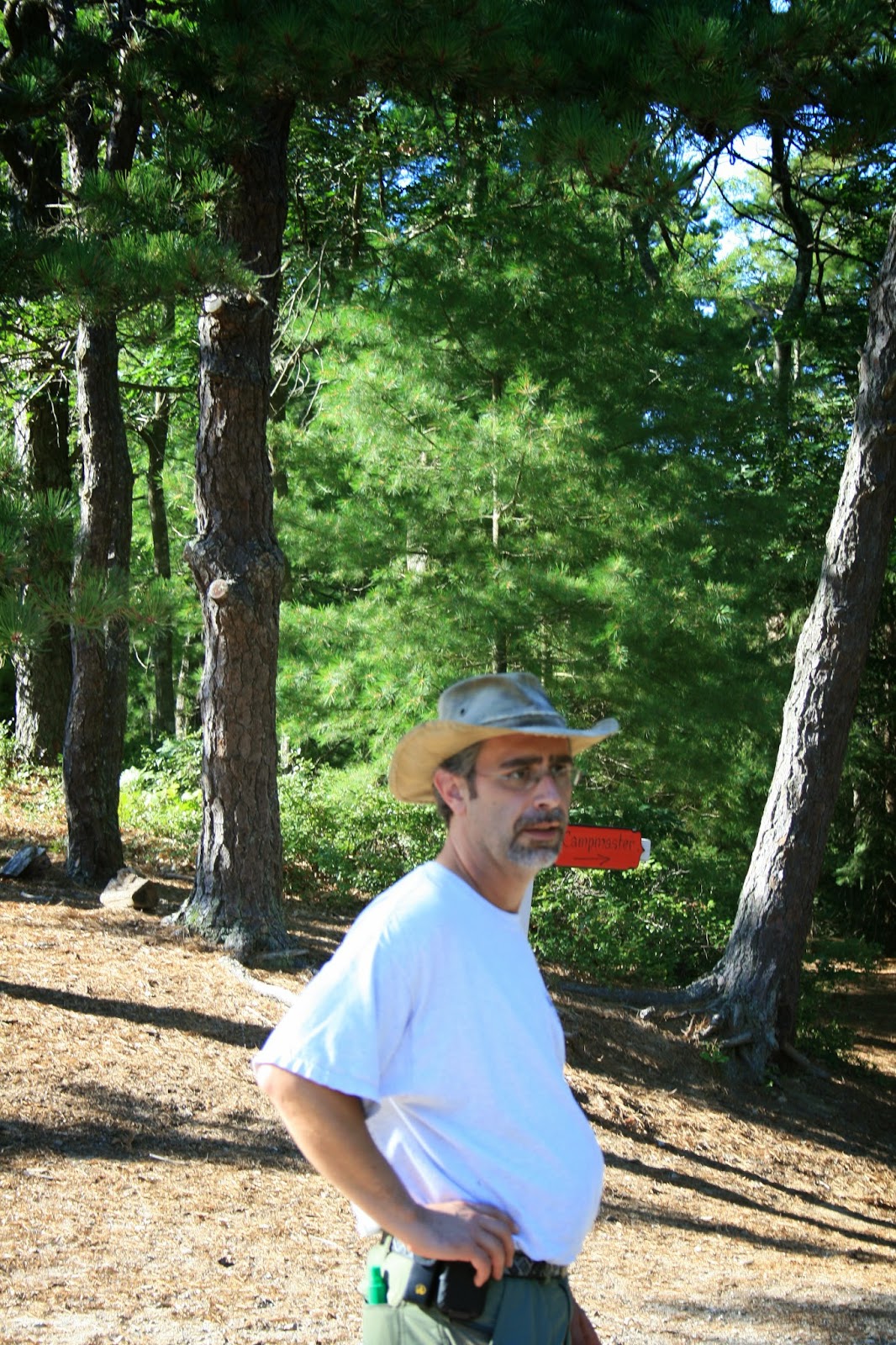 Email ThisBlogThis!Share to TwitterShare to FacebookShare to Pinterest
Labels: Pics

So, I woke up a bit late this morning. I didn't tell anyone, but I was planning on using snow and (hopefully) unplowed roads as an excuse to work from home today.

The insane wind kept waking me up, mostly because my insane wife insists on keeping the bedroom window open. Anyway, I didn't look out the window, but it sure sounded like one hell of a snowstorm.

Got up this morning, looked out the window... no snow. 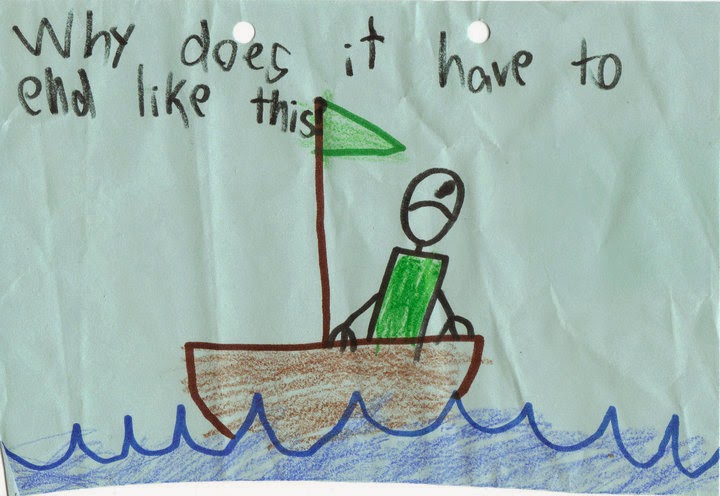 I joined as well, and am now Den Leader for Den 6. So, Nick and I will be having some adventures and learning new things together. I'm looking forward to our time together 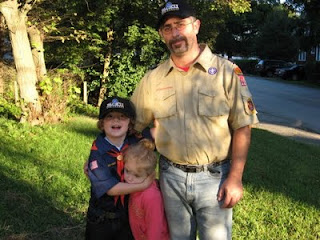 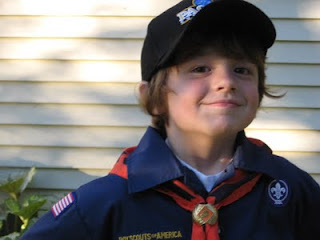 UPDATE: Well, obviously this is an old post. Found it hiding in the drafts, and wrongly assumed it would post as written on the original date.
Posted by TK8103 at 12:23 PM No comments:

So, one thing I noticed while reading all my old posts: I used to be fairly passionate about my job. Granted, it's obvious I was stressed and ranted quite a bit. But that speaks of passion. I cared enough to get upset. I also used to be really busy.

Life here has changed. I can honestly say I don't give two shits about this place.

Email ThisBlogThis!Share to TwitterShare to FacebookShare to Pinterest
Labels: Work

ADD is a misnomer

The problem with ADD is not actually a deficit of attention. Rather, it's an abundance.

Excluding hyperactivity (which I have never had, and why I wasn't diagnosed as a child), the two chief issues I have is too much attention and hyperfocus.

I'm able to give attention to something, for sure. Usually too much attention. The problem is, so many other things attract my attention, and I often move on before finishing whatever I was previously attending to. Hyperfocus is when my attention becomes narrowed to down to one thing, at the exclusion of all others.

Case in point: I just finished reading this entire blog. That's my major accomplishment for the past 18 hours. Yay me!

Update: Apparently I was so proud of my accomplishment, I did nothing else today. Yay me squared!
Posted by TK8103 at 11:12 AM No comments:

Has it really been almost 4 years since I last posted here? Stupid Facebook.

I spent a good chunk of the evening reading through old posts, mostly trying to decide if it's worth investing the energy to revive this blog.

The reason I even revisited this blog in the first place was my discovery of Allie Brosh and her blog Hyperbole and a Half . Nick (now 10) bought her book a few weeks back, and I finally got around to checking it out. I read it cover to cover, and then spent most of last night reading her blog.

I could, and should, gush at some length about how amazing and funny she is. I won't though, because the new Walking Dead will be on soon and I got shit to do before it starts. Suffice to say, she has caused me to think about my blogging days, and whether or not I should pick the habit up again. I've become a respectable citizen, and have to keep my FB presence fairly clean. While I enjoy being respectful, this blog (while not hidden) isn't exactly public, and would be a good place to vent my spleen. I'd like to think I could be as funny as Allie, but I'm not that person and probably shouldn't strive for it. But I have shit to get off my chest, and this might be a good venue.

So, we'll see. For now, consider this me resurfacing and saying "Hey!"